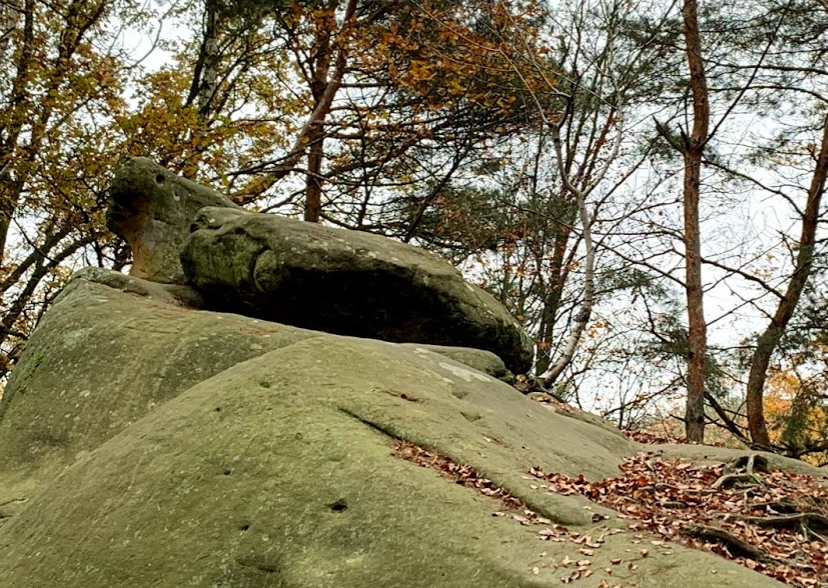 Far, far away... well, not that far after all, almost in the middle of Europe, in south-estern Poland, there's a Stone Town - scenic rocks with fantastic shapes. As the legend goes, once upon the time the town was a normal, bustling living place. But its inhabitants were involved in all kinds of evil and the whole town was turned to stone.

Tour of the town starts, where else, in its Town Hall. It is situated on a cliff over a river flowing in a deep gorge. The legend has it that if the waters of the river, which by the way is called "White River", raise high enough to cover the rock , the spell will be undone and the town will be back to life. Looking down from the "Town Hall" cliff, it doesn't look very likely. But who said that legends were realistic?

Entering the main part of the Stone Town, we come upon two rocks called Lower and Upper Fortress. It takes some imagination, but one can see how well fortified the town was.

Further along the trail we can see an Eagle (viewed from an angle it does look like an sitting eagle), a Badger (I wouldn't guess), Little Hell (a unique rock in the complex - one with reddish coating) and more - a total of 14 fantastically shaped rocks.

My favorite rock however was called "the Liar". The rock looks like... anything you can imagine and so tourists always argue what it actually is. This dilemma will not be solved until the Town Hall gets washed by White River and all rocks come back to life. Who knows what that rock would become?

There's a marked trail, stretching some 2km, so it makes an easy stroll, even for my father aged 70 and having knee problems. The terrain however is not flat, we descend into deep gorges only to ascend a steep opposite slope to see another rock. 2/3 thru the trail, there's a shortcut leading back to the parking. My party however didn't cheat on shortcuts and we walked the whole trail. Our reward was a gorge with a waterfall called "the Witch". It's not clear whether it's the witch who turned the town into stone. If so, then who turned the witch into waterfall? This mystery remains unsolved.

I discovered the scenic rock formations of Stone Town only recently. Definitely worth seeing. Allow an easy half of a day and combine with other local attractions. You may get some ideas from my private blog post (it's in Polish, use the translator widget)

The whole trail - return - took us some two hours. It was a cold and cloudy November day. Perhaps the light was not that great, but still the place is worth visiting. On our way home we came across Snufkin's House (remember the novel "the Moomins"?). Apparently it is his winter location, as everyone knows that in autumn Snufkin leaves the Moomins' valley in Finland and goes south.